Best 10 Medicine for Indigestion Problems in India– Dyspepsia, often known as indigestion, is a frequent ailment. When your body has problems digesting meals, this can happen. It takes place in the gastrointestinal tract (GI tract). The gastrointestinal tract (GI tract) is a collection of organs that aid in digesting. Indigestion can strike anyone at any time. It can be a one-time occurrence or a persistent issue. The signs and symptoms, as well as the causes, differ from case to instance. Functional dyspepsia is a term used to describe indigestion that has no known etiology. This article includes a list of the Best 10 Medicines for Indigestion Problems in India.

Indigestion can be caused by a variety of circumstances. These include eating hot and fatty foods, as well as foods high in acid or fiber, eating late in the day, drinking alcohol or too much caffeine, using certain medications, not getting enough sleep, and so on. Indigestion can also be caused by problems with your GI tract or other health issues. As a result, we’ve compiled a list of the Best 10 Medicines for Indigestion Problems in India.

A stomachache can be caused by indigestion. You may have pain, discomfort, or a burning sensation in your chest or stomach, as well as burping, bloating, gurgling stomach and/or gas, acid reflux, heartburn, nausea, and/or vomiting, among other symptoms. If your symptoms are severe, you should get medical help right soon. So, let’s have a look at the Best 10 Medicines for Indigestion Problems in India. 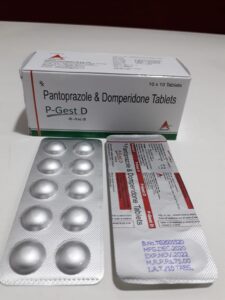 Pantoprazole and Domperidone are the two medications that make up the P-Gest-D Tablet. Pantoprazole & Domperidone Tablet is a prescription drug that treats indigestion, gastroesophageal reflux disease (Acid reflux), and peptic ulcer disease by reducing acidity symptoms such as indigestion, heartburn, stomach discomfort, and irritation. This Tablet lowers the amount of acid produced by your stomach and decreases the agony of heartburn and acid reflux.

P Gest O Tablet is a medication that combines two medications (Pantoprazole and Ondansetron) to treat nausea and vomiting. It is only used when a doctor has prescribed it. This medication works by lowering acidity and changing brain chemicals that cause nausea and vomiting. Pantoprazole & Ondansetron Tablet works by blocking the action of substances in the body that cause you to feel ill.

Aciday Syrup is made up of two medications: Magaldrate and Simethicone Ora. The combination drug Magaldrate & Simethicone Oral Suspension is used to treat acidity, stomach ulcers, and bloating. It is one of the best Medicines for Indigestion Problems in India since it neutralizes excess acid in the stomach and aids in the easy passage of gas.

P-Gest 40 Tablet is a pantoprazole-based drug that lowers the amount of acid produced in the stomach. It’s used to treat acid-related stomach and intestinal problems such as heartburn, acid reflux, peptic ulcer disease, and a variety of other stomach conditions caused by too much acid production including in Best 10 Medicines for Indigestion Problems in India.

Sucate-O Syrup is a combination of two different medication solutions. Sucralfate & Oxetacaine is a combination of drugs for acid reflux, stomach ulcers, indigestion, and heartburn. It aids in the relief of acidity and ulcer symptoms such as stomach discomfort and inflammation. It also helps with gas transit by neutralizing excess acid in the stomach.

Rastic Tablet Rabeprazole’s salt composition is used to reduce the amount of acid produced in your stomach, indigestion, heartburn, bloating, and other symptoms. It is used to treat acid-related illnesses of the stomach and intestine, such as acid reflux, peptic ulcer disease, and other stomach conditions caused by excessive acid production, and is included in the Top 10 Medicines for Indigestion in India.

Lanzol 15gm Capsule contains Lansoprazole, a medication that helps to reduce the amount of acid produced in the stomach. It is used to treat acid-related disorders of the stomach and intestine, such as acid reflux, peptic ulcer disease, and other stomach conditions caused by excessive acid production, and is listed among the Top 10 Indigestion Medicines in India.

Although indigestion seldom leads to major consequences, it can have a negative impact on your quality of life by making you feel uncomfortable and making you eat less. As a result, we’ve brought you the greatest Indigestion therapy available, along with quality guarantees and reasonable prices. So, out of the Best 10 Medicines for Indigestion Problems in India, pick the best one.